The “forest of stones” in the new Jewish cemetery in Brody. Photo © RJH.

This page presents a sortable table which lists all known Jewish burial sites in the Lviv oblast of western Ukraine with GPS coordinates and links to information sources, some of which provide descriptions, photographs, histories, and/or other data. At the bottom of this page, we also include an interactive map showing the known burial sites in this and other oblasts of western Ukraine. Although we have attempted to include every Jewish cemetery and mass grave in the oblast, it is likely that some omissions or other errors exist in the table; we welcome input to correct and complete the listing.

This page is one of a series covering several different oblasts of western Ukraine with a common purpose and strategy.

Read the overview to this study. 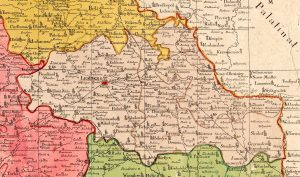 The boundaries of the Lemberg kreis at the beginning of the Austrian period in the late 18th century.
Image courtesy Gesher Galicia.

In modern Ukraine, the Lviv oblast lies in the far west of the country, sharing borders with three of the other oblasts of our original study (Ternopil, Ivano-Frankivsk, and Zakarpattia) and a long western border with southeastern Poland. It is a medium-sized oblast of Ukraine by area, but one of the largest by population, and is divided into 20 raions (districts) and 9 cities of district significance. The city of Lviv is the largest by population in western Ukraine, and for the past few centuries was the administrative center of the region no matter what royal, Soviet, or democratic government was in power. The area forms a core part of the historic region of Halychyna; following a period of rule by Polish kings, the region became part of the Austro-Hungarian Kingdom of Galicia from the late 18th century to WWI, with frequently-changing administrative boundaries. As a borderland between newly-formed republics three times in the 20th century, the land known as “Lvivshchyna” was often contested; in WWII it was part of Distrikt Galizien under German occupation, then annexed into the Ukrainian Soviet Socialist Republic, and finally a part of independent Ukraine in 1991.

Demographically, until the post-war period the region had always been diverse. In the 1921 Polish census, of the roughly 2.72 million residents of the voivodeship, about nearly 1 million identified themselves as ethnically Ukrainian (rusińską in the census) and more than 1.1 million as Greek Catholic; over 1.5 million self-identified as Polish, and just over 1.25 million as Roman Catholic; 190 thousand self-identified ethnically as Jewish, and 310 thousand as religiously Jewish; the remainder of the residents called themselves religiously Evangelical Christian or other (14 thousand), with many different ethnic groups (primarily German) but totaling fewer than 15 thousand people. Thus, many religious Jews considered themselves Polish. Overall, Jews as a religious group before WWII made up more than 11% of the area’s population, which was also typical for eastern Galicia in earlier years. At the time, the region spanned further west than it does today (incorporating portions of today’s southeastern Poland), and was dominated by the major cities of Lviv, Przemyśl, Drohobych, and Rzeszów; a quarter of the voivodeship’s Jews lived in the city of Lviv.

In the table below, identified Jewish cemeteries and mass graves are listed by name, raion (district), and type of site. All place names are listed by the current convention of English transliteration of official Ukrainian names. Where possible for each burial site, GPS coordinates (technically, coordinates which conform to the standard known as the World Geodetic System) are listed and linked to a digital map. If the listed GPS coordinates include an asterisk (*) and no map link, this means that the coordinates are only approximate, and that we and our sources did not have confirmed and precise information to confidently locate the site; although the general location is known, additional verification is needed. Then, where available, links to web data from several sources are tabulated; each of the sources provides different but overlapping data types, both descriptive and numerical. Integrating and reconciling data from different sources is often difficult due to varying standards in place names and descriptions, and we recognize that some locations may not have been identified here from our sources and our own research; we welcome input and comments on omissions and errors.

The major sources are named briefly here; these and other sources are described more fully on the overview page.

The table below is interactive. The number of visible rows on the page can be selected from 10, 25, 50, or 100, in a selector at the upper left. The table can be searched for specific town or raion names, in a box at the upper right. Place names can be sorted A-Z or Z-A, for example to list burial sites by town name or raion.

As noted above, we expect that this table may be incomplete and may contain errors. Contact information to submit additions and corrections for inclusion is listed at the bottom of the overview page.

The interactive map below locates and labels all of the identified Jewish burial sites from the table above, covering both cemeteries and mass graves in contrasting colors. Identified burial sites in other oblasts of western Ukraine are also shown, in different colors. Because there are hundreds of burial sites shown on the map, the pin set is very dense, and it helps to zoom the map to distinguish individual sites. Although all or nearly all cemeteries are displayed on the map, only the mass grave sites with precisely-defined locations are shown here; for many mass grave sites, only approximate or unverified locations are known, and research continues to better locate them for memorial purposes.