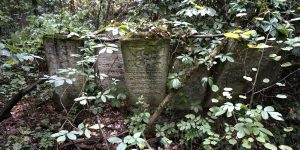 This page lists print and electronic references which provide information to support an essential early stage in the planning of Jewish cemetery preservation projects in western Ukraine: the development of concepts to guide project design and implementation. Creating and reviewing concepts for a cemetery project helps to identify the themes and goals of the proposed work, to define and communicate the what and why of the intended activity, and to initiate development of the strategies and tactical details of project plans.

The scope of these references is necessarily broad, encompassing a wide variety of topics: classical texts on heritage, memory, and identity; alternative approaches to conservation and decay; the design of sites of contemplation; lessons learned in the preservation of regional Jewish heritage; guidebooks on developing and communicating public history; Jewish cultural perspectives and traditions of death, mourning, and remembrance; working with sites of difficult history; tourism and community renewal; and multifaceted cemetery preservation manuals, pamphlets, and videos. The references were developed by philosophers, architects, cultural historians, religious leaders, civic and national heritage organizations, NGOs, and preservation practitioners. The print and digital works are relevant not only to the guide section on project concepts on this website, but also to even narrowly-defined practical projects; similarly, more focused references in other sections can give valuable feedback to project concepts in the form of feasibility and sustainability checks, materials choices, and coordination between activities.

Because these lists are lengthy, we have divided them into categories for simpler review; many of the references overlap two or more categories. A few of the listed references are highlighted with brief summaries in the first section below, “key references”. Other useful resources on this subject may be found in the sections on regional and international experts, and on technical tools, methods, and data. Except where noted otherwise, all references listed here are in English.

The Ashgate Research Companion to Heritage and Identity; Brian Graham and Peter Howard, eds.; Ashgate/Routledge, 2008.
A comprehensive survey of thought and practice in heritage, memory, and identity with broad scope and considerable depth, in 25 chapters covering diverse topics from modern perspectives. The text serves both as an introduction to the breadth of heritage studies and as a guide for developing project concepts. Specific topics relevant to Jewish burial site management in western Ukraine include personal and public histories, the contestation of heritage, the memorialization of violence and tragedy, heritage tourism, multicultural heritages, participation and local communities, and heritage transformation in Central and Eastern Europe.

A Graveyard Preservation Primer; Lynette Strangstad; AltaMira Press / AASL; 2nd edition, 2013.
A focused textbook on documentation, methods, materials, and ethics for graveyard conservation. Although the specific guidance and information has somewhat limited application outside the US, the text is nonetheless a model for planning and management of cemetery preservation projects, tasks, experimentation and learning, and the development of best practices in other geographies.

Curated Decay: Heritage Beyond Saving; Caitlin DeSilvey; University of Minnesota Press; Minneapolis, 2017.
A rumination on the cultural heritage trend away from “preservation at all costs” and toward alternate forms of care and engagement with heritage which allow for intentional, managed decay and disintegration. Through introductory and closing chapters which survey the literature of the movement and outline important questions, and specifically via chapters describing case studies (with successes, failures, and issues left unresolved), the author prompts consideration of alternate approaches and perhaps more nuanced thinking about management and sustainability of heritage as a cultural resource.

Jewish Cemeteries in the Classroom – An ESJF Guide; Esther Zyskina and Alexandra Fishel; ESJF European Jewish Cemeteries Initiative, 2020.
A manual for educators of middle and high school students, the guide complements the ESJF’s work in surveying and protecting European Jewish cemeteries using the history, art, and meaning of cemeteries and their headstones as a bridge to the multicultural past of Ukraine and other countries. Supporting the development of classroom and field lesson plans, the guide offers suggested learning paths and practical exercises to interest and lead students in Jewish life cycle traditions, the Hebrew alphabet and its use in dating epitaphs, as well as the key symbols carved into many Jewish headstones. Context for teachers is provided in overview essays and in key references to support further study.

Metropolitan Jewish Cemeteries of the 19th and 20th Centuries in Central and Eastern Europe: A Comparative Study; Rudolf Klein; ICOMOS – Journals of the German National Committee and Landesdenkmalamt Berlin; Michael Imhof Verlag, 2018.
Although sampling only about 20 urban Jewish cemeteries in large central and eastern European cities, none of them in Ukraine, this monumental study also includes more than 150 richly-illustrated pages of essays on aspects of 19th and 20th century Jewish funerary art, many of which are directly applicable to surviving cemeteries and matzevot in western Ukraine. In particular the perspectives and details are relevant to: the surveying and documentation of Jewish cemeteries; the conservation of stone burial markers; the new design and development of memorial monuments and landscaping plans; the rehabilitation and new construction of fences, walls, and gates; and the creation of informational signage to guide visitors’ interpretation of burial sites. The historical background information and the large catalogs of forms, shapes, materials, styles, symbols, typography, and inscriptions provide important references for the appreciation of Jewish cemeteries and the sensitive planning of preservation projects.

Places of Public Memory: The Rhetoric of Museums and Memorials; Greg Dickinson, Carole Blair, and Brian L. Ott, eds.; University of Alabama Press, 2010.
A study of the intersections of memory, place, and language in the form of nine essays on different case studies, significantly highlighting several recent memorials and museums at sites of conflicted history and memory. Considerations of the relationship between remembering and forgetting, of memorials and counter-memorials, and of the politics of remembrance in public spaces, each provide opportunities to consider how project concepts are formed, reviewed, and revised.

Conceptual Approaches to Sites of Memory

Conceptual Approaches to Sites of Memory