Known Cemetery Projects, At a Glance

The Jewish cemetery of Kuzmino (Zakarpattia oblast) before and after clearing and fencing projects in 2015. Photos © ESJF.

Other pages on this website list and link every identified Jewish burial site in western Ukraine, compiling data from other organizations and individuals plus personal research. On this page we list the much smaller subset of those cemeteries and mass graves where there is evidence of current active or sustained past projects to preserve the Jewish heritage at the site, in some way. Again we primarily use public websites to compile this list, but a significant portion of the data comes from visiting the sites and from communication with activists who often work without an internet presence or public recognition. Additional sources for information compiled here include Jewish Heritage Europe‘s news section, ESJF European Cemeteries Initiative project pages, and a small number of Facebook pages organized around specific western Ukrainian towns and burial sites.

After a brief description of project categories/types listed in this data, the data is tabulated by oblast to provide a quick overview of the sites and the different types of projects at each site.

Project information and contact links for Jewish cemeteries and mass graves in western Ukraine which are not listed in the table on this page may be forwarded to the contacts at Rohatyn Jewish Heritage for research and possible inclusion. We welcome any additions; knowledge about projects can help identify opportunities for support and learning. 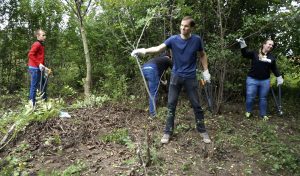 Ten project categories have been identified for inclusion in the table, corresponding roughly to the categories detailed in the project guide overview. The categories are:

RD = research and documentation: Historical research about the burial site and its associated Jewish community, and/or a catalog of images and transcribed/translated epitaphs of headstones at the site.
VC = vegetation clearing: Significant and/or regular clearing of wild vegetation, trash, etc.
HR = headstone recovery: Research, recovery, and return of Jewish headstones and fragments to their cemetery of origin.
LS = landscaping: Design and development which may include rock work, planting of ground cover, or decorative persistent trees and shrubs.
SC = stone conservation: Cleaning, repair, and resetting of headstones.
MM = memorial monument(s): Permanent memorials to the local Jewish community and/or local Holocaust martyrs.
SG = signage: Directional and/or informational signage about the site and the history of the local Jewish community.
FW= fencing or walls: Burial site boundary markers or barriers, including fences, walls, and gates.
SA = sustaining activity: Ongoing inspection, assessment, repair, and continuation work on past projects at the site.
MW = media and website(s): One or more project websites, social media sites or groups, or regular journal features.

What is a “Project”? 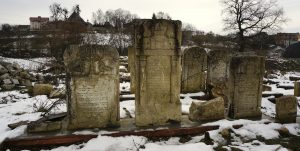 For this listing, a “project” is some form of activity intended to preserve memory of the cemetery and the Jewish community which it served, or for a mass grave, the community which was killed there. Efforts which work primarily or exclusively to identify and locate a burial site are already listed on the Identified Cemeteries pages and are not duplicated here. Memorials which are erected at a site to commemorate one or a few individuals (e.g. family members or tzadikim), rather than the community and the site itself, also are not included here. If there is evidence of a past project but the original work has significantly decayed (e.g. a perimeter fence or wall which has substantially collapsed), that is also not indicated as a current or sustained project. These judgments are acknowledged as imperfect, based on personal visits to sites and/or online images and other documentation, and are subject to review and update as new information becomes available – and new projects begin.

Because the focus here is on burial sites, active projects which aim to research, recover, and return Jewish headstones taken from cemeteries during or after WWII do not appear on these lists if there is no extant Jewish cemetery to which the stones can be returned. Collections of displaced headstones used in Soviet-era building projects, for example at former collective farms in Chabarivka (from the destroyed cemetery in Husiatyn) and Monastyryska (both in the Ternopil oblast), and at a Christian cemetery in Radekhiv and a former collective farm in Pomoriany (both in the Lviv oblast), are “orphan projects”, even if currently active, and they do not appear on these lists.

Projects At a Glance

The known projects are listed alphabetically below in a separate table for each oblast. For each burial site, the project activity is indicated with a symbol:

If no symbol is present, that project activity type is not known to be current or sustained at the site.