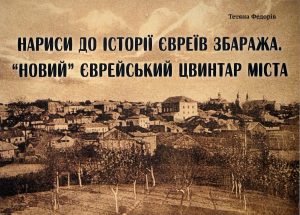 The cover of the book.

This page summarizes and analyzes a project which documented, through original research plus a deep review of other published research and surveys, a book-format printed monograph on the “new” Jewish cemetery of Zbarazh in the Zbarazh raion of the Ternopil oblast in western Ukraine. The book also documents every surviving Jewish headstone at the site in a complete catalog of images plus transcribed and translated epitaphs. The cemetery information is presented together with a new history of the Zbarazh Jewish community which had established and maintained the cemetery until its destruction in WWII, plus detailed historical data on key Jewish individuals and families of the town. 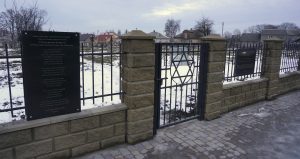 Project type: Book-format printed documentation in Ukrainian of the history of the Jewish cemetery, with a history of the associated Jewish community and the town, plus a catalog of all the headstones in the cemetery with (for each) a photograph plus a transcription and translation of the epitaph.
Location and site type: “New” Jewish cemetery of Zbarazh, Zbarazh raion, Ternopil oblast, Ukraine. GPS: 49.67415 25.76332.
Description of the site: The cemetery perimeter is a nearly-rectangular shape of approximately 360m length, enclosing roughly 0.70 hectare of area, on a slight gradient in a mostly residential area of the city near other cemeteries.
Ownership and stakeholders: The cemetery site is owned by the municipality of Zbarazh. Stakeholders include the local civil community, foreign descendants of Zbarazh pre-war Jewish and other families, historians, and students of Jewish culture.
Official heritage status: The site has no registered heritage status at municipal, raion, oblast, or national levels.
Activists working on/at the site: Tetiana Fedoriv, a researcher and local historian based in Zbarazh at the Національний заповідник “Замки Тернопілля” (Ternopil Castles National Conservation Area) at the time of the original work, now in a program for young scientists at Warsaw University. Contact info.
Other projects active at the site: Digital documentation of the cemetery terrain (see ESJF 2019 project); perimeter fencing (see ESJF 2018 project); partial photographing of the headstones (see CJA 1995 project); vegetation clearing by the municipality.

Some of the variety of headstone materials and styles. Photo © RJH.

History of the site: A Jewish community is recorded in Zbarazh since the 16th or 17th century, and established a first (or “old”) cemetery in the city by the 18th century or earlier; the “old” cemetery was erased during the German occupation of WWII and almost completely destroyed during the Soviet period; today the old cemetery is overbuilt with a school, a house, and a playground. The “new” Jewish cemetery opened in Zbarazh in the early 20th century, presumably because by then the original Jewish cemetery in the city was near capacity. The new cemetery served the Jewish community until WWII. It appears that during or after the war, some headstones were taken from the cemetery, but many remain. Local people report that the last Jewish burial in the new cemetery was in the 1960s, though no headstone with a late death date was found during Fedoriv’s research.

Current features of/at the site: The cemetery is situated adjacent to a major road and two minor roads, with the fourth side abutted by a partial road and residential foot trail. A large municipal cemetery is located about 300m to the east. The surrounding neighborhood is mixed, mostly residential. The cemetery was fenced along its full perimeter by ESJF in 2018. Within the cemetery, 175 headstones survive, many of them still upright in their original locations. Vegetation is controlled by the city following a major clearing effort organized by the city mayor in 2015. 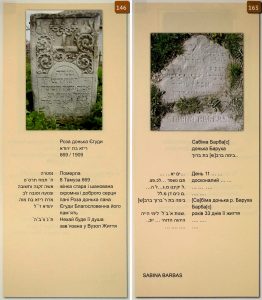 Two examples from the catalog of matzevot. Images © Tetiana Fedoriv.

Details of the project: The monograph gathers Fedoriv’s research results on the Jewish community of Zbarazh and the new cemetery in particular since her first visit to the cemetery in 2012. Photography and study of individual matzevot began in 2015 and continued for more than three years before publication. Supplemental research into Jewish customs for burial and mourning, including the symbolism in the figurative carvings, and the conventions and poetry in the epitaphs, along with mastery of Hebrew, continued in parallel; further work continues, to decipher additional epitaph text on some stones. The research project also resulted in a documentation section in the book on the synagogues and other Jewish community buildings of Zbarazh, biographies of prominent Zbarazh Jewish families and cultural figures, as well as a glossary of terms relating to aspects of Jewish culture, holidays, and religious practices.

In addition to descriptive historical sections, the book features a complete catalog of images plus transcribed (Hebrew) and translated (Ukrainian) epitaphs of all 175 headstones in the cemetery. To aid researchers and visitors to the cemetery, the catalog also features an index of names (in both Hebrew and Ukrainian) and dates in the epitaphs, as well as a list of common honorifics used to describe the deceased. An extensive bibliography of the research, more than 200 titles, is also included. The format is A4, printed in color, with 116 pages.

The book was published in a print run of 500 copies, available from the author and from Ukrainian bookstores, including online, at a single-copy price of about US$8.50 plus shipping. No electronic version of the book is currently available, but the author is investigating that as well as an English translation. Copies of the book appear in local (Zbarazh and Ternopil) bookstores, and online with Bookopt (and other online bookstores).

Issues encountered in the project: None. Vegetation clearing in the cemetery by the City of Zbarazh enabled clear photography of the headstones. The research was conducted on the author’s own time, using available resources and with the advice of specialists.

Project costs, one-time and sustaining: The project involved no material costs, and up-front expenses associated with creating the book were carried by the publisher. The author invested significant time over a period of more than three years to photograph, research, and analyze the symbolism and epitaph of each matzevah, plus a history of the Zbarazh Jewish community, its families and religious buildings, plus essential language and cultural aspects of regional Jewish life; that research continues for a possible second edition of the book.

An aerial view of the center of the cemetery. Photo © ESJF.

Current risks to preservation: The cemetery is fenced and well-maintained with municipal monitoring. There are no apparent physical risks, apart from ordinary weathering of the headstones.

Related projects in western Ukraine: A research and book project called Єврейське кладовище у Галичі (The Jewish Cemetery in Halych) which studies the mainstream (Rabbinic) Jewish cemetery of Halych (Ivano-Frankivsk oblast) was published in Ukrainian and modern Hebrew by Ivan Yurchenko and Mykhailo Nosonovskiy, published in 2018 by Kolo of Drohobych. At 242 pages, the monograph consists primarily of a photo and text catalog of almost 120 significant examples of the 651 identified headstones and fragments in the cemetery, with Hebrew transcriptions and Ukrainian translations of the epitaphs plus sketches of the major carvings and an analysis of the symbolism on each. Supplemental materials include an essay on the history of Jews in the Halych region, a bibliography of references, a tabulated index of the analyzed headstones, a list of all identified headstones, sketches and descriptions of the architectural elements of the three sections of a typical matzevah, an analysis of Hebrew script format variations from carved examples in the years 1880~1940, a topographic map of the cemetery, and a precise map of the location of each identified headstone in the cemetery. The book is available in Ukraine from the author for a single-copy price of about US$25 plus shipping.

An earlier research monograph by Ivan Yurchenko, Avram Kefeli, Natalia Yurchenko, and Alexander Berehovskiy, on the Karaite Jewish cemetery of Halych, was published in 2000 but is now out of print. Cemeteries in western Ukraine also feature prominently in an 80-page ethnographic essay by Y. I. Khodorkovskiy (who surveyed many of the Jewish cemeteries of the west for the US Commission), Єврейські некрополі України  (Jewish Necropolises of Ukraine); the 1998 text includes photos and discussion of Jewish cemeteries in Berezhany (Ternopil oblast), Yabluniv (Ivano-Frankivsk oblast), Sadhora (Chernivtsi oblast), and Khust (Zakarpattia oblast), among many others, including the two Jewish cemeteries in Zbarazh. There are also digital/online catalogs of headstone images and epitaphs, for example on the Tovste Jewish cemetery (see case study 02).

Related projects outside western Ukraine: The Jewish Museum in Prague, which manages the Old Jewish cemetery of the Czech capital as well as the repurposed ceremonial hall of the Prague Chevra Kadisha (among other community buildings), published a trilingual (Czech, English, German) edition in 2008 of Prague Jewish Cemeteries, by Arno Pařík, Vlastimila Hamáčková, Dana Cabanová and Petr Kiliment. Following essays on Jewish burial traditions and on the history of the Prague Jewish burial society, the book documents through color photographs and analytic texts three extant Jewish cemeteries in Prague, plus the earliest Jewish cemetery in the city (closed in 1478 and destroyed sometime after), as well as Jewish cemeteries in the Prague suburbs of Libeň, Smíchov, and Uhříněves. Because of the large size of these well-preserved cemeteries (the Prague Old Jewish cemetery alone retains around 12,000 matzevot), full documentation of images and epitaphs is not possible, but the book gives clear and informative data on a good selection of headstones for important local families. The book is available from the Museum at a single-copy price of about US$12 plus shipping.

A panorama of the Zbarazh new Jewish cemetery from inside the gate, in early 2020. Image © RJH.