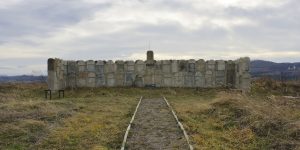 A Wall of Memory at the Jewish cemetery of Dobromyl (Lviv oblast). Photo © RJH.

Most of the key references for the design and development of memorials at Jewish cemeteries and mass graves in western Ukraine can be found on the references page for project concepts on this website rather than here. This is because memorials at burial sites are public art; the development needs and issues can vary significantly depending on the concepts and constraints at individual sites, and memorials should be carefully integrated with the survey, landscape, signage, and communication efforts of the project – and especially with plans for sustaining the site.

The references listed here are intended to support activists in three primary topics of memorial development and sustaining: the selection and incorporation of symbols of Jewish identity in physical memorials, the maintenance of monuments constructed of stone and/or concrete, and additional considerations both for inspiration and for caution. Further references for the first topic are found on the project concept references page, and for the latter topic on the stone conservation references page.

Because these lists are lengthy, we have divided them into categories for simpler review; many of the references overlap two or more categories. A few of the listed references are highlighted with brief summaries in the first section below, “key references”. Other useful resources on this subject may be found in the sections on regional and international experts, and on technical tools, methods, and data. Except where noted otherwise, all references listed here are in English.

Monuments and Memorials; James E. Young; The YIVO Encyclopedia of Jews in Eastern Europe; YIVO Institute for Jewish Research, web page, 2010.
An excellent introduction to the purposes and variety of Jewish memorials and the monuments often constructed to carry and preserve memory, this essay discusses the history of Jewish-origin memorial markers and monuments across Eastern Europe, both before and after the Holocaust. The particular problems of marking Jewish burial sites stripped of prior markers (matzevot and shrines to religious leaders in cemeteries) or which have never had visual memorials (wartime mass graves) are considered and placed in context of Jewish funerary and memorial traditions. The essay includes an extensive list of further resources in book form.

Samuel Gruber’s Jewish Art & Monuments; Samuel D. Gruber; website/blog, 2008~present.
A blog site with additional links and resources authored by one of the leading academics researching and writing on Jewish public art and memory. Grounded in practical knowledge of the enormous problems of Jewish heritage sites in post-war Europe (Gruber served as Research Director of the US Commission for the Preservation of America’s Heritage Abroad, which produced the first comprehensive survey of Jewish burial sites in Ukraine among other countries) and continuously refreshed by ongoing visits to art and heritage sites in Europe, the blog connects modern architecture and monument design reviews with historical traditions and the evolution of symbolism, frequently reflecting on memory and meaning. A selection of blog posts relevant to symbols and motifs in cemeteries, signs, and sculpture is linked below; the site is text-searchable for these and other topics.

The Texture of Memory: Holocaust Memorials and Meaning; James E. Young; Yale University Press, 1994.
A pioneering study of Holocaust memorials when it was published nearly 30 years ago, this text still serves as a foundation resource for the creation and interpretation of monuments commemorating Holocaust events and sites as well as the individual victims and communities who were impacted. Although sites in Ukraine are scarcely included in the regional reviews, and burial sites are not a primary focus of the text, the study takes perspectives and develops themes with broad applicability – and specific challenges – to the evolving meaning of public art and monuments, especially as they serve Jewish memory. The book’s introduction by itself could serve as a critical review of new monument project concepts.