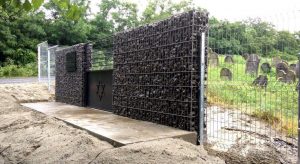 A fence and gate installed at the cemetery in Khmilnyk (Zakarpattia oblast) in 2017. Photo © ESJF.

The core part of the Jewish cemetery preservation information and guidance provided on this website takes the form of best practices, i.e. methods and tools to conduct one or more types of common cemetery projects. That practical advice is supplemented by a large resource section on this website, with links to references and information in a variety of media formats from many experts in a wide range of fields. This page presents an introduction to a third section of the website, which documents in summary form a number of actual Jewish cemetery projects which have been implemented and/or are currently in progress in western Ukraine.

For any one type of cemetery project, usually there are many different approaches which may be applied – with a range of complexity and cost, of chances of success, and of sustainability. Seeing what others have done and how they have done it can provide valuable knowledge about choices and risks facing new project leaders. 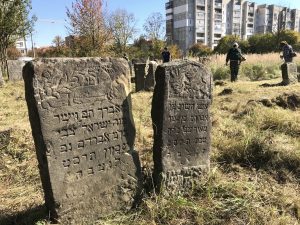 Volunteers clearing brush in the cemetery of Kalush (Ivano-Frankivsk oblast) in 2018.
Photo © RJH.

Elsewhere on this website we have compiled linked lists of all identified Jewish burial places in western Ukraine, and on a separate page we have also catalogued all preservation projects we know of at Jewish cemeteries and mass graves in the region. On this page we have selected a small fraction of those projects which we believe are instructive for others in their objectives, their effort and cost, and their interrelationship with other projects at the same sites. Not all of the projects summarized here have been ultimately successful; there are also lessons to be learned from partial success and from only temporary success.

The selected projects listed here are in roughly the same order as the phases of the guide. The first several projects are “non-contact”, intended to publicly document the burial sites focusing on one or more perspectives and data sets but without physically altering the sites. The next projects are physical in a variety of ways, each intended to retard or reverse the loss of memorial significance at the sites, by pushing back natural decay or by adding new markers or signs to focus the thoughts of visitors. The project list is rounded out by efforts to engage people around the world in learning or re-learning about specific heritage sites, and by projects in which a single activist organization attempts to advance multiple preservation projects at a single site in order to rehabilitate and conserve a burial place in several ways.

A fence and an ohel in the cemetery of Stratyn (Ivano-Frankivsk oblast). Photo © RJH.

Appended to the project list are summaries about a few example burial sites where there is no known active project, both where the sites are stable with no apparent physical risks, and other sites where damage is already obvious and/or where the risk of greater damage is apparent. These examples are included here because a great many Jewish cemeteries and mass graves in western Ukraine are threatened, but, faced with limited resources, activists working in the region need to consider a kind of triage to prioritize efforts at preservation. 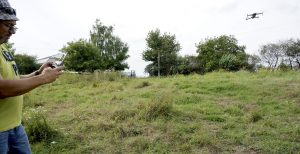 ESJF terrain survey by drone at the old cemetery in Rohatyn (Ivano-Frankivsk oblast) in 2019. Photo © RJH.

All of the projects described here are situated in western Ukraine. For each project, a brief summary gives the site location and status together with a note about other projects at the same site. The project is then analyzed in context of the site’s history and relevant features, specific project actions and their effects, problems encountered during the work, single and/or recurring costs, and recognized risks to perpetuation of the work. For comparison, other similar projects in western Ukraine are listed and linked, as are related projects outside of the region; sometimes the most detailed and useful examples of cemetery preservation projects are elsewhere in Europe or even further abroad, although the tools, issues, and costs can differ significantly with distance from western Ukraine. A valuable external source of active project summary and contact information on more than 40 additional Jewish cemetery projects across nine countries of central and eastern Europe is the ESJF Catalogue of Best Practices for Jewish Cemetery Preservation, supported by a consortium of European education and heritage organizations and the EU.

Recovery of Jewish headstones from under Barvinok Street in Lviv, during a six-day emergency project led by the LVC in 2018. Photos © RJH.

In the list below, projects are noted by their type and their location, and a number code is appended for our internal reference. Projects are grouped as described above, but most projects have more than one aspect as detailed on the project pages themselves. 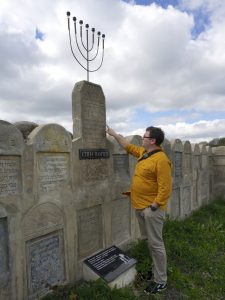 The memorial in the cemetery of Dobromyl (Lviv oblast) in 2017. Photo © RJH.

Refer to the guide overview for a summary of typical project types and phases.

This list of selected case studies is not intended to describe every important project in western Ukraine; a full project list is given on a separate page. Suggestions for key projects which will fill significant gaps in the case studies listed here may be forwarded to the contacts at Rohatyn Jewish Heritage for consideration.