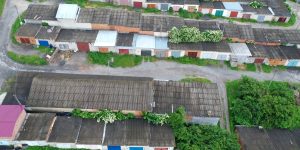 An aerial view of the Zboriv cemetery site from a 2019 drone survey. Photo © ESJF.

This page summarizes and analyzes a Jewish cemetery site in western Ukraine at which there are no active projects, and which is at risk of destruction, but where there is a possibility of at least partial recovery before complete and irrevocable loss occurs. The cemetery is in Zboriv in the Zboriv raion of the Ternopil oblast, a town with a significant Jewish past and some surviving Jewish heritage (a former synagogue now in use as a church, and a marked mass grave site with memorial).

This page is intended as a reference for Jewish cemetery projects now in the planning stages in western Ukraine or beyond, in particular at sites with risks of imminent damage. Following a brief summary of the site, the material below describes the current status of the site together with a list of known issues and ongoing risks. Related sites both in western Ukraine and elsewhere in Europe are also briefly mentioned, for comparison. At the bottom of this page are links to documentation and to additional reference information about the burial sites.

Project type: None; only status and risks are reviewed here.
Location and site type: Jewish cemetery of Zboriv, Zboriv raion, Ternopil oblast, Ukraine. GPS: 49.66338 25.13387.
Description of the site: The cemetery perimeter is a roughly rectangular shape of approximately 370m length, enclosing roughly 0.85 hectare of area, on flat ground within the city residential area. The site is currently in use as a collection of small automobile garages and other storage sheds.
Ownership and stakeholders: The cemetery site owner is unknown, but likely the municipality of Zboriv. Stakeholders include the private owners of existing garages on the site, the local civil community, foreign descendants of Zboriv pre-war Jewish and other families, historians, and students of Jewish culture.
Official heritage status: Unknown.
Activists working on/at the site: None. The cemetery has been identified in a survey by ESJF (2019), but no other known research or physical work is active or planned.
Other projects active at the site: None. 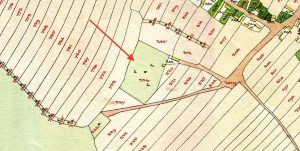 The cemetery indicated on an 1830 cadastral map.
Image courtesy DATO and Gesher Galicia.

History of the site: A Jewish community is recorded in Zboriv from at least the mid-17th century. According to research by ESJF, the cemetery is shown on Austrian imperial maps from the 1780s, on an Austrian cadastral map of 1830, on Austro-Hungarian military survey maps of the 1860s and 1880s, and on a Polish Wojskowy Instytut Geograficzny (WIG) map of 1939. Interviews of current residents during ESJF’s site survey gave reports that the cemetery was cleared of headstones during the Soviet period, although a Jewish descendant of Zboriv emigrants reported in 2004 that the cemetery was cleared during the German occupation of WWII. The subsequent location and use of the displaced stones is not known.

Current features of/at the site: Eighty to one hundred small automobile garages and/or storage sheds are built in seven rows on the cemetery surface; the garages are in active use for storage and automobile service. It is not clear whether the foundations of any garages are deep enough to have disturbed buried human remains. Local citizens are aware that the site was an active Jewish cemetery before WWII. No Jewish headstones stand at the site; in 2019 a small number of displaced fragments of grave covers and other stones were visible as castoffs inside one corner of the cemetery perimeter. There are no monuments, signs or other markers to designate the site as a Jewish cemetery. 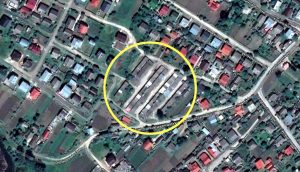 The cemetery indicated on a satellite view. Image © CNES/Airbus, Maxar Technologies, and Google.

Details of the project: No active project exists at the cemetery. There are no known plans to recover the site as a Jewish cemetery.

Issues encountered in the project: None, as there is no project.

Project costs, one-time and sustaining: None, as there is no project.

Current risks to preservation: The site is already in incompatible use, and there is no apparent protection of the site against future development in other incompatible forms. The legacy of Soviet-era re-purposing of the cemetery undermines its opportunities for new protection in independent Ukraine.

Related projects in western Ukraine: Numerous similar at-risk Jewish cemetery sites exist in western Ukraine, including at Skalat (now a stadium, also in the Ternopil oblast), the old cemetery in Zolochiv (now a gas station, in the Lviv oblast), and at Yabluniv (now a farm but still mostly open, in the Ivano-Frankivsk oblast). 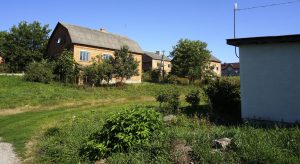 Surviving grave markers (foreground) at a corner of the cemetery. Photo © RJH.

Related projects outside western Ukraine: Erasure of Jewish cemeteries is less common outside of western Ukraine, but examples exist in Vylkove (now an industrial garage and forest in the Odesa oblast of Ukraine) and in Hîncești (now a mixed-purpose area mostly used for private gardens in Moldova).