This page summarizes and analyzes a project which documented through a review of published research and surveys, plus original research, a history of the Jewish cemetery of Tovste in the Zalischyky raion of the Ternopil oblast in western Ukraine. The cemetery information is presented in context of a growing but already extensive history of the Tovste Jewish community which had established and maintained the cemetery, and significantly, histories of the other communities (both Ukrainian and Polish) of pre-WWII multicultural Tovste. All of the historical narrative and data have been published in organized sections and pages on a permanent website for free public access. This project also incorporates information and data from projects managed by other individuals and organizations at the same site.

Project type: Digital documentation of the history of the Jewish cemetery, with an extended history of the associated Jewish community and the town.
Location and site type: Jewish cemetery of Tovste, Zalischyky raion, Ternopil oblast, Ukraine. GPS: 48.84961, 25.73207.
Description of the site: The cemetery perimeter is an irregular shape of approximately 350m length, enclosing roughly 3/4 hectare of area, on a hillside with moderate slope.
Ownership and stakeholders: The cemetery site is owned by the municipality of Tovste. Stakeholders include the local civil community, survivors and foreign descendants of Jewish families from pre-war Tovste and nearby towns and villages, historians, and students of Jewish culture.
Official heritage status: Unknown.
Activists working on/at the site: Douglas Hykle, a Canadian descendant of an ethnic Ukrainian family originally from Tovste, through his website tovste.info. Contact info.
Other projects active at the site: Digital documentation of the cemetery terrain (see case study 01); digital documentation of the surviving headstones in the cemetery (see case study 02); perimeter fencing (see ESJF 2019 project); regular vegetation clearing and maintenance (by the municipality and local goat herders); other histories of the Jewish community, including the cemetery (see the Sefer Tluste, in original Hebrew and Yiddish and in translation to English). 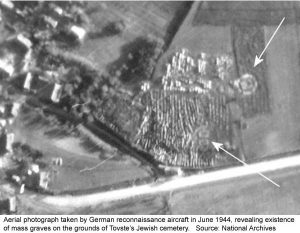 The Luftwaffe aerial photo of the cemetery site and mass graves;
click the image to see it on the tovste.info Jewish history page.

Headstones in the Tovste Jewish cemetery from a photo by Douglas Hykle.

Details of the project: The overall town documentation project has been underway since the first visit to Tovste in the late 1990s by Hykle, a foreign descendant of an ethnic Ukrainian family of the town. Originally an endeavor focused on pre-1900s genealogy, the research quickly broadened to embrace the entire town, and gained a web presence beginning in 2006; the investigation actively continues, with frequent trips to Tovste and to other European, North American, and Israeli locations to access archives, conduct interviews, and meet with other researchers.

After the basic US Commission / IAJGS survey of the Jewish cemetery and almost a decade before the wider JGB effort, Hykle began his own documentation effort to capture headstone photographs and translations of epitaphs of about 10% of the total number, as a study of the feasibility of conducting a comprehensive survey.

Hykle’s overall town documentation project has provided important insights about the Jewish cemetery and avenues for further research. For example, abundant witness testimony from various sources sheds light on what transpired during mass killings at the cemetery and helps to identify some of the victims buried in the mass graves. Contemporary exhumation reports offer further details. Moreover, the recent exercise to transcribe and map headstones may – with further spatial and temporal analysis – offer brand new information of value to genealogists and historians.

Issues encountered in the project: The feasibility study demonstrated that, with sufficient volunteers, it would not be a major undertaking to document this particular cemetery – owing to the fact that the grounds had been kept largely free of obstructive vegetation, and the remaining headstones were in relatively good condition. The transcription exercise revealed to Hykle that it can be easier to read inscriptions from a photographic image (processed or otherwise) than directly from the headstone itself.

A lack of communication about (and between) similar cemetery documentation projects may have caused some redundancy of effort. For example, Hykle only came to know of the JGB work several years after it was conducted in 2014 (he and JGB have since had fruitful collaboration). He later discovered by accident that the Center for Jewish Art had already documented about 150 of the same gravestones in 1991, which was also not mentioned on the JGB website.

Project costs, one-time and sustaining: The limited feasibility study to photograph and transcribe a portion of the cemetery headstones entailed mostly free volunteer time, which can be counted in days. In contrast, the cost of the much wider, ongoing town documentation project – lasting some 15 years to date, involving several tens of thousands of hours of work and considerable expense associated with travel to numerous countries – would be impossible to quantify with any degree of accuracy.

Current risks to preservation: To the physical cemetery site: none apparent, apart from ordinary weathering and hitherto uncontrolled access; the future impact (to ongoing cemetery maintenance and public perception) of fully enclosing the cemetery remains to be seen. To the data: None so long as the site author continues to support and maintain the website. Since 2008 the tovste.info website has been crawled and recorded more than 50 times, and the subsection on the Jewish cemetery at least 20 times, in the Internet Archive Wayback Machine.

Related projects in western Ukraine: Many JewishGen family history pages in the town-focus KehilaLinks database include descriptions, photographs, and histories of western Ukrainian Jewish cemeteries, and many pages with good cemetery information also include extended histories of the associated Jewish communities. Significant examples include Skala-Podilska and Okopy (Ternopil oblast), Shchyrets (Lviv oblast), and Mizhhiria (Zakatpattia oblast). However, there are no uniform standards for documentation across the KehilaLinks pages, and few of these pages also include histories of other ethnic groups in the towns for comparison and context. Several local history museums in western Ukraine also provide good information about their Jewish cemeteries, including a project by the local museum in Brody which describes all of the historical Jewish cemeteries of the city, including the surviving “new” or cholera cemetery.

Related projects outside western Ukraine: The same KehilaLinks pages described above also cover places with Jewish cemeteries throughout Europe and beyond. In the Czech Republic, the tourist office of the Jewish community of Brno (South Moravia region) has produced an online guide to over 70 Jewish cemeteries of the region, including cemetery maps plus photographs and data on many of the headstones at each site; an example is the extensive page for the cemetery in Velké Meziříčí, which is accompanied by a page describing the Jewish heritage sites in the town, including the history of the cemetery. In Germany, the Salomon Ludwig Steinheim Institute for German-Jewish History (Institut für deutsch-jüdische Geschichte) at the University of Duisburg-Essen is cataloguing Jewish headstone inscriptions at cemeteries around Germany and in former German lands in a database project called Epidat (Database of Jewish Epigraphy); an example is the Jewish cemetery of Mainz on the Rhine and Main rivers, which includes details on more than 100 inscriptions along with a well-researched history of the cemetery and re-use of its headstones over the past millennium.