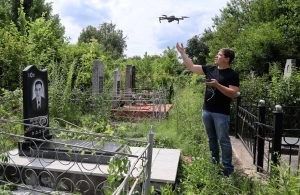 This page summarizes and analyzes a project which documented through historical records and map review, walkover survey, ground and aerial photographs, plus photogrammetry and other spatial analysis, the apparent boundaries and the terrain surface of the Jewish cemetery of Tovste in the Zalischyky raion of the Ternopil oblast in western Ukraine. A summary of the reference survey data plus photographs and survey notes have been published in a database on a permanent website for free public access. This project coordinates directly and indirectly with several other projects managed by other individuals and organizations at the same site. 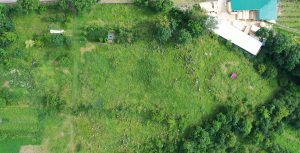 An aerial view of the Tovste cemetery from the drone. Photo © ESJF.

Cemetery boundaries in overlay on a satellite image. Composite © ESJF.

Details of the project: The documentation project was conducted and completed in 2019, with cemetery data uploaded to the project website shortly after the drone survey. Research included historical research and a review of records and maps to establish the evolution of prewar cemetery boundaries and postwar changes. New physical data collection included a walkover survey by a team leader, establishment of ground control points with precisely-fixed GPS locations, plus aerial photography using a digital-camera-equipped civilian unmanned aerial vehicle (UAV, or drone). With the collection of many aerial photographs of the cemetery site, it is possible to use photogrammetry and other software tools to accurately estimate the cemetery boundary/perimeter length, as well as the approximate 3D profile of the cemetery surface within the boundaries, and to identify and map the locations of key cemetery features. 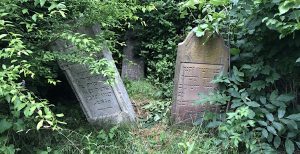 The published results of the survey include a selection of photographs taken at ground level during the survey, featuring matzevot and an ohel plus the state of vegetation and the landscape at the time of the survey. Aerial views include a photograph of a large portion of the cemetery from the drone, plus an overlay sketch of the cemetery area on an internet satellite view of the site. A text section gives a historical overview of the Jewish community of Tovste from several sources, and brief notes about historical events related to the cemetery. Key survey data is summarized on a page which describes the cemetery’s location and access, land ownership, the cemetery’s current status (demolished or not) and condition (vegetation and other threats), the existence and condition of fencing, a rough count and date range of extant headstones, the existence and condition of constructions (ohels and other monuments) on the site, and the presence of mass graves within the cemetery boundaries. The urgency of protective fencing is assessed based on several factors, and the perimeter of the cemetery is calculated from survey data to enable cost estimates for possible future fencing projects.

The original research records, site photographs, and the composite photogrammetry analysis plus a 3D cemetery terrain model are retained by ESJF in the project offices, and may be inspected by local preservation activists and municipalities to support heritage projects at the site.

Issues encountered in the project: ESJF reports that no technical or administrative issues were encountered in this project. Historical maps and records were available to enable research and establishing approximate historical boundaries. Permits to fly the drone at the site were approved (no nearby prohibited areas). Portions of the cemetery were covered with wild vegetation, but enough of the site was visibly open that ground control points could be established and seen from the air by the drone. 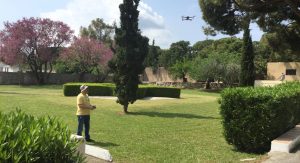 Start of another drone survey. Photo © Inside Unmanned Systems.

Project costs, one-time and sustaining: Total research, survey, analysis, and documentation costs for this cemetery were estimated by ESJF to be US$330-370. The documentation project was completed by a single site surveyor with drone, plus several historians and engineers working on this and many other site survey projects in the central project office in Kyiv. An estimated 5 person-hours were spent to conduct the historical research; roughly 2 person-hours were required at the site in Tovste to set 10 to 15 ground control points and pilot the drone to measure the cemetery terrain, plus an additional 1 person-hour to process the data for upload to the database. Not included in this cost is pre-survey clearing of excess vegetation in the cemetery, amortized administration and engineering development of the methods, tools, and database infrastructure, the transportation costs to send the surveyor to the site, or the post-processing of drone images to create a 3D terrain model. The documentation effort for this site is just one part of a large pilot project encompassing 1500 Jewish cemeteries in five European countries, with more than 700 cemeteries already surveyed in Ukraine alone. Thus, the time and materials costs for documenting the Tovste cemetery are distributed over many sites, saving money and effort for individual sites while adding some shared higher-level administration, project management, and engineering costs.

Current risks to preservation: To the physical cemetery site: none apparent, apart from ordinary weathering and uncontrolled access; the future impact (to ongoing cemetery maintenance and public perception) of fully enclosing the cemetery remains to be seen. To the data: none so long as ESJF continues to support and maintain their database and website. As of January 2020, the ESJF data for the Tovste Jewish Cemetery is not yet recorded in the Internet Archive Wayback Machine. 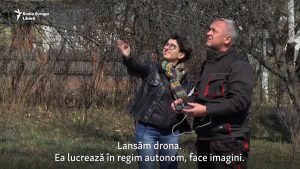 Related projects in western Ukraine: As part of a pilot project to protect Jewish cemeteries in Europe through research, mapping, and monitoring, ESJF European Jewish Cemeteries Initiative has completed more than 450 cemetery documentation projects in western Ukraine (out of a total European pilot project count of 1500) which record locations, boundaries, and the histories of the cemeteries and the communities which established them; examples include large and well-preserved cemeteries such as Kremenets (Ternopil oblast), erased cemeteries such as Kniahynychi (Ivano-Frankivsk oblast), and overbuilt sites such as the Jewish cemetery in Skalat (Ternopil oblast). Documentation of locations and boundaries also appears for a handful of sites in western Ukraine on the website of Jewish Galicia and Bukovina (JGB), including for example at Pechenizhyn (Ivano-Frankivsk oblast).

Related projects outside western Ukraine: The scope of the ESJF Jewish cemetery documentation work extends well beyond western Ukraine, including in many other regions of Ukraine such as in Cherche (Khmelnytskyi oblast), plus in Moldova (such as in Orhei), and Greece (such as in the new cemetery of Ioannina). The ESJF survey project continues in 2020 and 2021 to document another 1500 cemeteries in Croatia, Georgia, Hungary, Lithuania, Poland, Slovakia and Ukraine.