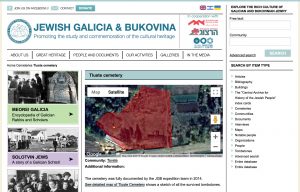 The main page on the Tovste cemetery project on the JGB website.

This page summarizes and analyzes a project which documented through photographs, full epitaph transcriptions, and mapped locations, all of the Jewish headstones in the Jewish cemetery of Tovste in the Zalischyky raion of the Ternopil oblast in western Ukraine. All of the headstone images and additional data have been published in a database on a permanent website for free public access. This project coordinates directly and indirectly with several other projects managed by other individuals and organizations at the same site. 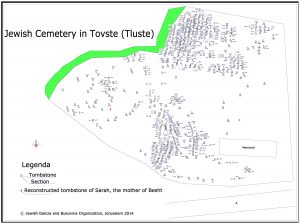 Project type: Digital documentation of Jewish headstones in images, text, and mapped locations.
Location and site type: Jewish cemetery of Tovste, Zalischyky raion, Ternopil oblast, Ukraine. GPS: 48.84961, 25.73207.
Description of the site: The cemetery perimeter is an irregular shape of approximately 350m length, enclosing roughly 3/4 hectare of area, on a hillside with moderate slope.
Ownership and stakeholders: The cemetery site is owned by the municipality of Tovste. Stakeholders include the local civil community, survivors and foreign descendants of Jewish families from pre-war Tovste and nearby towns and villages, historians, and students of Jewish culture.
Official heritage status: Unknown.
Activists working on/at the site: Jewish Galicia and Bukovina (JGB), a non-profit organization based in Jerusalem, Israel. Contact info and webform.
Other projects active at the site: An earlier photographic survey of the headstones in the cemetery, with 149 images (see CJA 1991 project); digital documentation of the cemetery terrain (see case study 01); digital documentation of the history of the cemetery and the Jewish community (see case study 03); perimeter fencing (see ESJF 2019 project); regular vegetation clearing and maintenance (by the city and local goat herders). 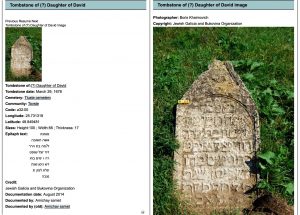 JGB’s documented details for the oldest matzevah in the Tovste cemetery, including the transcribed epitaph at left, and a high-detail photograph at right.

Details of the project: Prior to the documentation effort, JGB arranged and funded a full clearing of wild vegetation in the Tovste cemetery through their local partners. The documentation project was conducted and completed in 2014 by an expedition team of 10 people from Israel working full-time over 5 days, photographing headstones and conducting a full geodesic survey of the terrain and the location of all of the stones. Transcription and initial translations were made on site by volunteer yeshiva and university students together with university professors of Jewish art, history, and culture from Hebrew University in Israel and Saint Petersburg State University. Following the field work, preparation of the data continued in Israel with photo tagging, mapping, and transfer of epitaph transcription and translation data into the online database. Thumbnail photographs of more than 600 matzevot, most with names and burial dates, are presented freely online in a list format. Clicking on a thumbnail image presents a larger image, which can be further expanded by clicking again. Clicking on a name in the original list presents a page with much more detail, including the entire legible portion of the epitaph in Hebrew, the stone’s dimensions, and its location in the cemetery in GPS coordinates. A separate detailed cemetery map indicates the location of every documented matzevah by JGB index number. Free and filtered database searches can be used on the site to locate specific recorded names and epitaphs in English or Hebrew.

In addition to the documentation effort, JGB paid special attention to the educational opportunities of the travel and research work. The student volunteers took a special course on the history of the Jews of Galicia and Bukovina prior to the travel, and were asked to write essays with their thoughts and impressions during the expedition, for later publication in Hebrew on the JGB website. 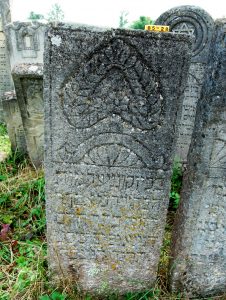 The tombstone of a woman named Ester, from the JGB database for the Tovste cemetery.

Issues encountered in the project: As highlighted by Dr. Ilia Lurie, a scholar of Eastern European Jewry, JGB adminsitrative director, and a leader of the Tovste expedition delegation, it is extremely important that the epitaph transcription work is carried out by volunteers who are well acquainted with traditional Hebrew. JGB’s experience is that even for Israelis who are fluent in modern Hebrew, transcribing epitaphs replete with Bible and Talmudic citations is not a simple challenge. JGB has learned that yeshiva students are specially-skilled volunteers who can fulfill this language need, and the documentation effort in Tovste was strengthened by their knowledge.

A related issue with different impacts is that the spelling of names – especially female names – is not uniform on older matzevot. In order to accurately preserve the epitaphs as carved, JGB uploads the inscriptions to their database without altering any letters. As a result, the database has a low level of name unification, which can make database searches for individual people more difficult.

Project costs, one-time and sustaining: Field work documenting the Tovste Jewish cemetery was conducted as part of a single expedition which also included 5 days at the Jewish cemetery in Bolekhiv, concluding work there which began the previous year. Altogether the expedition cost JGB approximately US$30,000, including clearing and cleaning the sites, airfare and local transportation for the volunteers and staff, local housing, kosher meals, geodesic survey work, and miscellaneous expenses.

Current risks to preservation: The clearing of vegetation from the cemetery in 2014 (prior to the documentation work) left the site and its headstones exposed and at possible risk to vandalism, although open access also made it possible for informal ongoing clearing by goats. The cemetery was fenced and gated by ESJF in 2019; the future impact (to ongoing cemetery maintenance and public perception) of fully enclosing the cemetery remains to be seen. There are no risks to the data so long as JGB continues to support and maintain their database and website. As of early 2020, the JGB data for the Tovste Jewish Cemetery is not adequately recorded in the Internet Archive Wayback Machine.

Related projects in western Ukraine: Jewish Galicia and Bukovina (JGB) has completed more than a dozen full cemetery documentation projects focused on images and brief transcriptions/translations of epitaphs in western Ukraine, including for example at Buchach and Pidhaitsi (also in the Ternopil oblast), plus Bolekhiv and Burshtyn among others in the Ivano-Frankivsk oblast, and Vyzhnytsia in the Chernivtsi oblast. Another project, with growing global coverage but currently only limited documentation in western Ukraine to date, is the JewishGen database project JOWBR; near-complete coverage with names and many photographs of a few major sites such as the Brody new cemetery (including useful project management notes) compares to less-complete coverage and fewer or no photographs at some other sites; Tovste is not included, but a dozen other locations in the Ternopil oblast are. The grave maintenance company Mitzvat Emet provides a visual and text-searchable index to headstones in Lviv’s Yaniv new Jewish cemetery (and other sites throughout the former Soviet Union), but for precise location information or other services, it charges a service fee. 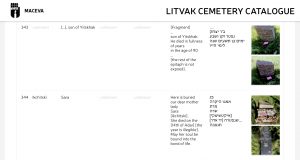 Related projects outside western Ukraine: In Poland, the Foundation for the Documentation of Jewish Cemeteries in Poland (Fundacja Dokumentacji Cmentarzy Żydowskich w Polsce) has been working since 2006 to record and database headstone inscriptions in roughly one hundred Polish Jewish cemeteries of all sizes, from those with a single recovered stone to Warsaw’s Okopowa Street cemetery, with more than 80,000 surviving stones. Information available in the database includes the deceased’s name, spouse’s and/or parents’ names, key dates, location in cemetery, and a photograph; GPS location of individual stones is available upon request for some cemeteries. The project operates with sponsorship by and in partnership with a variety of community, genealogy, museum, and heritage organizations, and with grants from the Polish Ministry of Culture and National Heritage. In Lithuania, the NGO Litvak Cemetery Catalogue ‘Maceva’ researches and databases headstones in many Jewish cemeteries, with photographs, key data, and full transcriptions and English translations; the data is held behind a paywall to encourage financial support, but the database for the Jewish cemetery in Seirijai is open for study as an example. In the Czech Republic, the tourist office of the Jewish community of Brno (South Moravia region) has produced an online guide to over 70 Jewish cemeteries of the region, including cemetery maps plus photographs and data on many of the headstones at each site; an example is the extensive page for the cemetery in Velké Meziříčí. In Germany, the Salomon Ludwig Steinheim Institute for German-Jewish History (Institut für deutsch-jüdische Geschichte) at the University of Duisburg-Essen is cataloguing Jewish headstone inscriptions at cemeteries around Germany and in former German lands in a database project called Epidat (Database of Jewish Epigraphy); an example is the Jewish cemetery of Mainz on the Rhine and Main rivers, which includes details on more than 100 inscriptions along with a well-researched history of the cemetery and re-use of its headstones over the past millennium.