This page summarizes and analyzes a project which designed and constructed a full perimeter fence around the Jewish cemetery and wartime Jewish mass grave complex in Busk in the Busk raion of the Lviv oblast in western Ukraine. A summary of the fence size and style plus photographs and construction notes have been published in a database on a permanent website for free public access. This project coordinates indirectly with several other projects managed by other individuals and organizations at the same site. 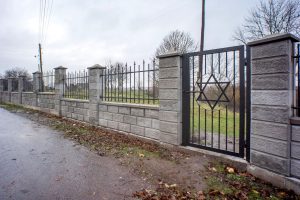 Project type: Full perimeter fence with gates, enclosing both a historic Jewish cemetery and a complex of wartime Jewish mass graves.
Location and site type: Jewish cemetery of Busk, Busk raion, Lviv oblast, Ukraine. GPS: 49.96694 24.62718.
Description of the site: The cemetery perimeter is an irregular shape of approximately 620m length, enclosing roughly 1.5 hectares of area, on a hillside with significant slope. The mass graves are adjacent to the cemetery on the slope and the flat land between the cemetery hill and the river.
Ownership and stakeholders: The cemetery site is owned by the municipality of Busk. Stakeholders include the local civil community, foreign descendants of Busk pre-war Jewish and other families, historians, and students of Jewish culture.
Official heritage status: Unknown.
Activists working on/at the site: ESJF European Jewish Cemeteries Initiative, a non-profit organization founded in Germany with offices in Kyiv, Ukraine. Contact info and webform.
Other projects active at the site: Digital documentation of the cemetery terrain (see ESJF 2019 project); digital documentation of headstone images (see CJA database sets for 1991 and 1993); cemetery and graves perimeter mapping (see CJA 1993 project); forensic research at the mass graves site in 2006 (see YIU historical and research summary); a field school to extract, research, and document headstones for an online open database (see JGB 2019 news report); occasional vegetation clearing and maintenance (by the city and local cattle herders).

Views of the steel fence and its attachment hardware. Photos © RJH.

A long view of the concrete fence from within the cemetery. Photo © RJH.

History of the site: Research and a 1998 survey by Iosif Gelston for the US Commission (now IAJGS International Jewish Cemetery Project) indicates that the cemetery was probably established by the Jewish community in the 15th century; the earliest dated matzevah documented by researchers is from 1520 (purported to be the oldest surviving Jewish headstone in Ukraine). During the German occupation of WWII, in 1942 and 1943 roughly 2000 Jews from Busk and the surrounding villages were killed at pits dug adjacent to the cemetery, then buried in these common graves. After the war, a residential area developed next to the cemetery; the IAJGS report indicates that houses were built on the western edge of the cemetery.

Current features of/at the site: Many headstones were removed during and/or after WWII, however several hundred headstones remain, mostly in original locations though many are now significantly tilted. A city road borders the cemetery along the southeast edge, and the small Solotvyna River passes to the north of the cemetery perimeter. Numerous large trees and heavy shrubs grow at the bottom of the steep slope near the center of the cemetery. Several prewar footpaths and a dirt road continue to cross the cemetery. A Holocaust memorial in black marble erected in 2004 stands at the top of the slope; otherwise there is no signage. 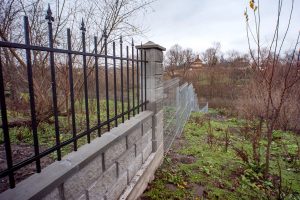 The concrete/steel fence transition at the east end. Photo © ESJF.

Details of the project: The project included a site survey, engineering and planning of the fencing, rabbinical review, securing permits for construction, acquisition of fence and foundation materials, and the complete construction of the full perimeter fence. The fence style along the bordering road (roughly 170m) is composed of a poured concrete foundation, hollow concrete block columns with concrete caps, concrete block and cap base infill between columns, with a welded and painted iron picket fence above the base infill; the overall height of this roadside section is about 1.5m. At each end, the concrete fence section is joined to a heavy galvanized steel wire sectional fence (roughly 450m) which encloses the cemetery, following an irregular path up and down the perimeter gradients; the steel fence is attached to steel posts which are embedded in poured concrete footings anchored in the soil. Two gates opening from the road are installed in the concrete fence; one includes a decorative and signifying Star of David. A wide double gate is installed down the slope on the dirt road which connects the cemetery to the fields (and further, to the city center). An ungated gap was created in the fence at a footpath on the north edge of the cemetery; see below.

Issues encountered in the project: ESJF reports there were no unusual issues in this project compared to typical fence projects in their experience, although the steep gradient in some lengths of the cemetery perimeter necessitated adaptation of the sectional steel fence and its fasteners to conform to the terrain, and portions of the cemetery required significant vegetation clearing. Accommodations also needed to be made to local residents who live around the cemetery, because only a small number of bridges across the Solotvyna River which runs adjacent to the cemetery are available to neighbors to the south. As an example, for decades a footpath through the cemetery has enabled cemetery neighbors to access a footbridge to easily reach the nearby historic St. Paraskeva church to the north; using the footpath saves churchgoers about 800m of additional walking. To keep goodwill in the neighborhood and prevent objections at the municipal level, access to the path was preserved in the fence design and construction.

Two local women head to the church across the river via an intentional gap in the fence. Photo © RJH.

Project costs, one-time and sustaining: Overall survey, design, construction, and administrative costs for this single site project have not been calculated by ESJF, although the costs of the components and labor are known. Because this project is part of a long-term pan-European Jewish cemetery fencing project managed by ESJF, some costs for research, tools, and management are shared with many other projects in Ukraine and thus lower than for a typical individual project.

The estimated cost per unit length for materials and construction (labor) of the decorative concrete post and metal picket portion of the fence is approximately US$100/m. Materials and labor for the longer steel wire and post fence run approximately US$45/m. To these basic costs, roughly 10% additional cost is typically required for administration, engineering, and rabbinical review. At the Busk cemetery, additional labor costs were also required for pre-construction vegetation clearing, adapting the steel wire fence to sections with steep gradient, and the decorative and utility gates.

Current risks to preservation: The perimeter fence provides a clear visual boundary for the cemetery, reducing future risks of incompatible development. The prior issues of wild vegetation growth within the cemetery remain unchanged by the fence. The durability of the fence will take time to determine; the light steel fabric which makes up the majority of the fence is modular and should be easy to replace if sections become damaged or lost; however the sectional design and attachment can also open the fence to a risk of illegal disassembly and theft for metal resale. Although the neighborhood garbage and recycling bins which previously stood on the cemetery grounds are now placed outside the fence, there remains a risk that garbage may accumulate within the cemetery if the bins are not collected and emptied often enough.

Views of the lower gate from inside and outside of the cemetery. Photos © RJH.

Related projects in western Ukraine: ESJF European Jewish Cemeteries Initiative have been fencing Jewish cemeteries in western Ukraine since 2015 as part of a long-term, German-funded program to project cemeteries across Europe; projects completed to date in western Ukraine include at Okopy (Ternopil oblast), Zabolotiv (Ivano-Frankivsk oblast), Kalnyk (Zakarpattia oblast), and Nepolokivtsi (Chernivtsi oblast). Individual fencing projects have been conducted at a number of other Jewish cemeteries in the region during the past decades, for example at Skala-Podilska (Ternopil oblast), Rohatyn (Ivano-Frankivsk oblast), and Irshava (Zakarpattia oblast).

Related projects outside western Ukraine: ESJF has also constructed fences around Jewish cemeteries in Ukraine outside of the western region, and in six other European countries, as part of their larger program. Examples include sites in the Khmelnytskyi oblast of Ukraine such as Slavuta plus Pyriatyn in the Poltava oblast, as well as Vărzărești in Moldova, Horažďovice in the Czech Republic, and Frampol in Poland; these fences are composed of a variety of materials and designed in several different styles. Fencing projects conducted by other organizations and individuals include at Novi Pazar in Serbia, Lahishyn in Belarus, and some years ago in Levoča in Slovakia; often these fencing efforts are coupled with other cemetery preservation projects. A few of the sites demonstrate problems which can arise or become aggravated as a result of fencing, including unchecked vegetation growth, and vandalism.