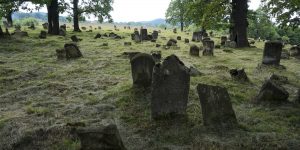 Headstones standing above well-maintained grass in the Jewish cemetery of Bolekhiv. Photo © RJH.

This page summarizes and analyzes an ongoing project for the clearing and maintenance of wild vegetation in the Jewish cemetery of Bolekhiv in the Bolekhiv raion of the Ivano-Frankivsk oblast in western Ukraine, and at a Jewish wartime mass grave in a forest outside of Bolekhiv. The seasonal clearing and maintenance is performed by local people and managed by a Jewish descendants organization. The cemetery maintenance follows on a larger project to preserve and maintain the cemetery undertaken by the Jewish descendants organization in coordination with other organizations working at the same site and other sites in western Ukraine. In addition, other organizations have undertaken related projects at the cemetery as well as other cemeteries in western Ukraine. This page shares information with the related case study 15 active at the same sites.

Goats cutting grass and shrubs in the cemetery in 2017. Photos © RJH. 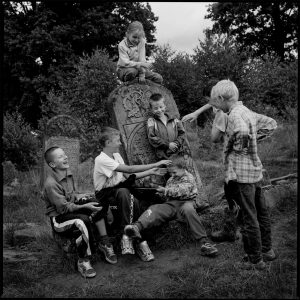 Children playing in the cemetery in 2001. Photo © Matt Mendelsohn.

History of the site: See case study 15 for history specific to the Taniava forest mass grave of Bolekhiv Jews.

In the Yizkor Book for Bolekhiv, Dr. M. Hendel reports that the Polish landowner of the original village aimed to create a new town of Bolekhiv, applying to the king for privileges for Jews to settle in the area and to have equal rights to local gentiles. The king approved the request in 1603, and Jews were given a grant of land for a cemetery and a shul. Surveys of all matzevot in the cemetery by Jewish Galicia and Bukovina (JGB) in 2013 and 2014 revealed that the oldest burial dates still recorded there in stone are 1615 and 1685, with more than 60 stones surviving from the 1700s. In the Yizkor book, the cemetery is mentioned only once more in stories of Jewish life in Bolekhiv before the Holocaust, and then only obliquely. Two Yizkor book authors record mass killings at the Jewish cemetery in October 1941 and subsequent mass burials there through 1943 from other killing events at the cemetery and in town, as well as of Jews who died in the ghetto from typhus and starvation; the western end of the cemetery is identified as the primary burial area for most of these victims. Two of the authors also mention significant damage to the cemetery during the German occupation, including the felling and removal of some of the headstones for construction works.

A view of the cemetery west end and mass grave area in 2001. Photo © Matt Mendelsohn.

The few surviving Jews of Bolekhiv left the region after WWII, and not many visited the town again in the 20th century. In 2001, four siblings of the Mendelsohn family of the US, Jewish descendants of the Jaeger family of pre-war Bolekhiv, traveled to the town to research their roots. One sibling created a section on his family website about the visit; another has documented images of the town and the Jewish cemetery on his professional photography website; a third wrote a critically-acclaimed and best-selling non-fiction book about his family research and the relatives who disappeared in the Holocaust in Bolekhiv.

The non-profit Bolechow Jewish Heritage Society (BJHS) was formed in 2007 by Jewish descendants and interested others with the aim of protecting and commemorating the cemetery and other Jewish heritage sites in Bolekhiv. A survey of the cemetery site by the Heritage Foundation for Preservation of Jewish Cemeteries (HFPJC) – Avoyseinu preceded the reconstruction by BJHS and HFPJC of a full-perimeter wall around the cemetery in 2009, and other cemetery maintenance activities as part of this project.

Also from 2009, several Jewish heritage organizations have documented the cemetery in various ways, including through photographs and the transcription/translation of headstone epitaphs, as well as perimeter and terrain surveys. The Jewish Galicia and Bukovina group, with the support of BJHS, conducted a comprehensive photographing of the cemetery tombstones, searchable by an online index. 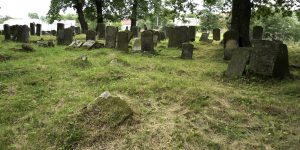 Under the canopy of trees near the crown of the cemetery hill. Photo © RJH.

Current features of/at the site: See case study 15 for a description of the forest mass grave site. The cemetery is situated adjacent to a small road about 1km south of the town center of Bolekhiv. The road bounds a portion of the south perimeter of the cemetery, with agricultural and grazing fields wrapping the entire west end of the site; residential houses and gardens abut against the cemetery on the north and short east sides. The cemetery is enclosed by a steel-reinforced poured concrete wall built by BJHS and HFPJC to about 2m high, without openings except for a wide steel gate in the north section of the wall. Access to the site is complicated by private property boundary walls which close off a former public road to the cemetery gate; access is currently via a neighbor’s garden (the neighbor’s phone number is on a sign on Olena Pchilka Street outside a gate to his property). An information sign in three languages is placed prominently adjacent to the cemetery gate (see case study 15). Surveys of standing headstones in the cemetery have counted nearly 1500 surviving matzevot, many in very good condition despite their considerable age. The graves of three prominent rabbis are marked with memorial markers and painted concrete surrounds. The grounds are currently covered with well-maintained grasses; about a third of the site is covered by a canopy of very tall oak trees. 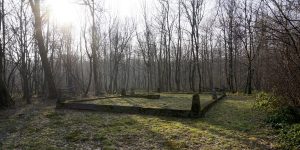 The mass grave monument in a forest clearing outside Bolekhiv. Photo © RJH.

Details of the project: A first complete clearing of dead and wild vegetation at both the cemetery and mass grave sites was organized and paid for by BJHS members in Israel and the US ahead of a planned commemorative ceremony in Bolekhiv in 2009. At that time, grandchildren of a Ukrainian Christian family, which had sheltered two Jewish brothers at their home in Bolekhiv during the deadly German occupation of World War II, agreed to do the clearing work for a modest fee. The BJHS purchased tools and equipment to support the initial clearing work, and the local family worked together to complete the task. At the time of the ceremony, leaders of the BJHS met with the local family and proposed a long-term arrangement to pay for clearing work at both sites three times per year during the growing season, and remove heavy grass and shrubs on the ground plus any dead and fallen tree branches; the local family agreed, and has continued the clearing work each year since.

Issues encountered in the project: None. The project is proceeding smoothly, now for roughly a decade.

Project costs, one-time and sustaining: The purchase cost for tools and equipment was typical for western Ukraine, which closely matches that of western Europe and the US for similar-quality tools; normal tool wear means that most tools require replacement after 5 to 10 years of careful use and maintenance. Labor costs for this project have been lower per hectare of area than the project documented in case study 05, largely because the physical work is directly and efficiently managed by the local family with close personal connections to Jewish survivors from Bolekhiv.

Current risks to preservation: In western Ukraine, vegetation grows rapidly throughout the warm months of the year, which requires regular monitoring and action to prevent overgrowth and damage to the sites; the arrangement between the BJHS and the local family ensures the sites are appropriately cared for. The large oak trees on the cemetery grounds will naturally shed heavy branches from time to time, and more during severe weather events, possibly causing damage to a small number of standing matzevot if the limbs are not carefully cut and removed before they weaken and fall; the grounds around the mass grave memorial have been cleared of trees, eliminating this risk. As for many open areas without buildings in western Ukraine, nearby residents may occasionally use the sites for grazing animals such as goats, but this rarely damages cemeteries, and the practice is diminishing in Ukraine as small farming recedes from towns and cities. No other risks are apparent, apart from ordinary weathering of the headstones. 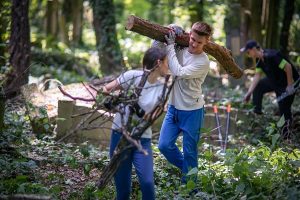 Related projects outside western Ukraine: In Poland, the US Christian non-profit charity organization The Matzevah Foundation (TMF) conducts annual volunteer events clearing Jewish cemeteries, at typically 5 to 10 locations; in 2019, they continued work in Częstochowa, Krośniewice, Krzepice, Oświęcim, and Przerośl. TMF also provided hands-on training to RJH during volunteer events in Nasielsk, Poland and in Rohatyn. Filtered searches of news articles on the web portal Jewish Heritage Europe return many clearing project reports at Jewish cemeteries around Europe; among those are projects at the Kozma street cemetery in Budapest, Hungary, at Beshenkovichi, Belarus, and at Tuzla, Bosnia and Herzegovina.