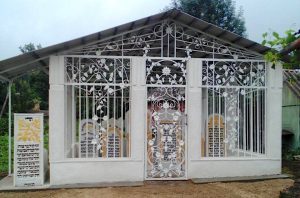 This page summarizes and analyzes a project which reconstructed an ohel over the graves of renowned tzadikim and their families in the Jewish cemetery of Zabolotiv in the Sniatyn raion of the Ivano-Frankivsk oblast in western Ukraine. A brief history of the rabbinical dynasty in Zabolotiv plus photographs of the completed ohel and its matzevot have been published online for free public access by the organization which funded and organized the project. This project coordinates indirectly with other projects managed by the same and other organizations at the same site.

Project type: Full ohel reconstruction within the Jewish cemetery, enclosing the graves of known tzadikim and their families, plus cleaning and painting of the matzevot.
Location and site type: Jewish cemetery of Zabolotiv, Sniatyn raion, Ivano-Frankivsk oblast, Ukraine. GPS: 48.46935 25.28849.
Description of the site: The cemetery perimeter is an irregular shape of approximately 420m length, enclosing roughly 0.75 hectares of area, on a partially wooded, flat terrain. The ohel is near the southern perimeter of the main section of the cemetery.
Ownership and stakeholders: The cemetery site is owned by the municipality of Zabolotiv. Stakeholders include the local civil community, foreign descendants of Zabolotiv pre-war Jewish and other families, historians, and students of Jewish culture; the graves of the tzadikim are of particular importance to their descendants and to followers of their Hasidic dynasty.
Official heritage status: Unknown.
Activists working on/at the site: Geder Avos Jewish Heritage Group, a non-profit Jewish heritage organization founded in New York, USA by the World – Center of European Rabbis (WCER), coordinated funding and communication for the project. Contact info and webform. Their partner Oholei Tzadikim managed the reconstruction and painting project at the cemetery site.
Other projects active at the site: Digital documentation of the cemetery terrain (see ESJF 2019 project); digital documentation of headstone images (see CJA 1994 project); digital documentation of previous ohel (see CJA 2010 project); vegetation clearing and perimeter fence construction (in coordination with Geder Avos; see ESJF 2017 project). 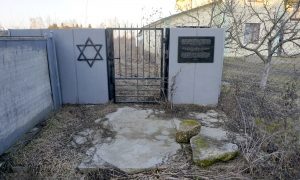 The new fence and gate at the cemetery entrance. Photo © RJH.

History of the site: Research and a 1996 survey by Yuriy Isaakovich Khodorkovskiy for the US Commission (now IAJGS International Jewish Cemetery Project) indicates that the cemetery was probably established by the Jewish community before the 18th century; surveying the surviving matzevot for dates in past decades has not been possible due to excess vegetation. The IAJGS report also records that the cemetery perimeter was encroached after WWII by housing development.

Current features of/at the site: Some headstones were removed during and/or after WWII, however at least several hundred headstones remain, mostly in original locations though some are now significantly tilted; in the 1996 survey, some headstones retained traces of colored paint. Private residences and gardens border the cemetery along all sides, with a wooded section at the east side and a football field at the northeast corner. Large trees and heavy shrubs grow at several locations of the cemetery. A full perimeter fence and gate was erected by ESJF in 2017. There is no informational signage.

An open-frame ohel was built over the graves of tzadikim of the Hager family at the southern end of the cemetery in the 1990s and documented by CJA in 2010; reconstruction of that ohel in 2018 is the subject of this case study.

Newly-painted matzevot of tzadikim and their families under the ohel. Photos © RJH.

Details of the project: The project began with inspection of the existing ohel structure and its environment and the condition of the protected matzevot, plus planning and notification of the local municipal authorities. The ground around the ohel was cleared, including removal of a large tree adjacent to one side, which hung over and pressed against the ohel roof. Reconstruction included a new concrete foundation around and under the ohel; extension of the upper portion of the support columns, a new metal roof; complete replacement of the steel bar infill and wrought iron and decorative lacework panels and gate; and new protective painting of the entire structure. In addition, the matzevot of the tzadikim and their family members were cleaned and coated with new paint in white, black, and gold colors. A new gravel path between the cemetery gate and the ohel gate was laid down to control vegetation and ease access for visitors.

Issues encountered in the project: There were no unusual issues in reconstructing the ohel.

Project costs, one-time and sustaining: The overall survey, design, cleaning, reconstruction, and administrative costs for this project totaled approximately US$10,000.

Current risks to preservation: The earlier vegetation clearing and fencing projects have improved protection of the site and reduced gradual damage to the ohel and to headstones in the rest of the cemetery, but past experience at the site suggests that the rapid growth of wild vegetation will be a recurring concern. The IAJGS survey of 1996 indicated that some vegetation growth was previously controlled by grazing animals, which are now excluded from the cemetery by the fence. Otherwise ordinary vandalism and natural decay of the built features, including in the ohel, should be reduced. 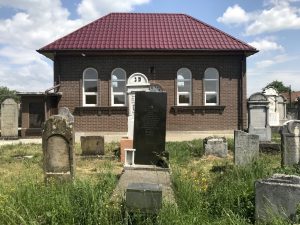 The ohel at a project in Khust. Photo © Geder Avos.

Related projects outside western Ukraine: Together Geder Avos and Oholei Tzadikim have constructed ohels across Ukraine, including at Ostroh (Rivne oblast), Mohyliv-Podilskyi (Vinnytsia oblast), and Medzhybizh (Khmelnytskyi oblast). Geder Avos has coordinated ohel projects in other countries as well, including at Siret (Romania), Niepołomice (Poland), and Tachov (Czech Republic).