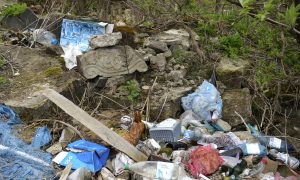 This page summarizes and analyzes a destroyed Jewish cemetery site in western Ukraine at which there is a small memorial but no active project, and where there is a significant risk of further loss of Jewish heritage if no useful action is taken. The cemetery is in Husiatyn in the Husiatyn raion of the Ternopil oblast, a town with few visible signs of its Jewish past apart from a lovely former synagogue in the downtown area. The cemetery is overbuilt with a large multistory apartment complex, and is beyond preservation. However, Jewish headstones taken from the cemetery and built into a collective farm during the Soviet era, now disused and crumbling, are at risk of loss or misuse. 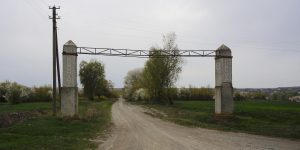 The entrance to the former collective farm. Photo © RJH.

Project type: None; only status and risks are reviewed here.
Location and site type: Jewish cemetery of Husiatyn, Husiatyn raion, Ternopil oblast, Ukraine. GPS: 49.07256 26.19359. Headstones at the former “Komunist” collective farm outside the village of Chabarivka, Husiatyn raion, Ternopil oblast, Ukraine. GPS: 49.07819 26.13704.
Description of the site: The original cemetery perimeter was a stepped rectangular shape of approximately 140m length, enclosing roughly 0.1 hectare of area, about 1km from the town center and the historic synagogue building, at the top of a steep slope which descends to the Zbruch River. The cemetery site is in use for residential housing and parking. The collective farm site in Chabarivka is an abandoned complex of standing and fallen masonry buildings on uneven ground about 4km from the Husiatyn Jewish cemetery and 5km from Husiatyn town center.
Ownership and stakeholders: Ownership of the cemetery site is unknown but likely by the municipality of Husiatyn as inheritor of common land from the Soviet era. Ownership of the Chabarivka farm site is unknown. Stakeholders include the local civil communities of Husiatyn and Chabarivka, residents of the apartment complex, foreign descendants of Husiatyn pre-war Jewish and other families, historians, and students of Jewish culture.
Official heritage status: None.
Activists working on/at the site: None. Interest and concern have been expressed since at least 2017 by local journalists and by a non-profit NGO based in Husiatyn, Blahe Dilo (“Good Work”). Contact info.
Other projects active at the site: None, although Blahe Dilo is working to preserve the historic synagogue in Husiatyn.

Excerpts from a 1928 map of Husiatyn and Chabarivka (left), including the Jewish cemetery (blue arrow at right). Source: WIG Map Archive.

History of the site: An informal history and a separate timeline of the Jewish community of Husiatyn cite its origin in the 16th century, its split by the partitions of Poland into Austrian and Russian empires (with the majority of Husiatyn Jews at the time on the Austrian side of the Zbruch River), and its growth during the Austrian period from 1200 to more than 4000 Jews by 1900, making up a majority of the population and with a significant Hasidic dynasty before a decline due to heavy structural damage to the town in WWI. No mention is made in any known sources of the establishment date of a Jewish cemetery in Husiatyn. No Jewish cemetery is shown on an Austrian cadastral map of the town surveyed in 1862 (the future site is indicated as pasture land) although there is a Christian cemetery shown nearby, and a regional map of 1880 also lacks any indication of a Jewish cemetery. The cemetery is clearly indicated on Austrian and then several Polish-era regional military maps from surveys and printing between 1904 and 1930.

At an unknown date during WWII, all headstones were removed from the Jewish cemetery in Husiatyn, and at some point during the subsequent Soviet period they were apparently incorporated into foundations and barn structures of the “Komunist” collective farm 4km away, at the eastern edge of the village of Chabarivka. Apartment buildings were constructed on the Husiatyn cemetery site, reportedly in the 1970s. At some point before or after the collapse of the Soviet Union, the collective farm was abandoned; the site is apparently now used as an unofficial garbage dump.

Behind the apartment building on the Husiatyn cemetery site, and the Jewish memorial. Photos © RJH.

Current features of/at the site: Today the Husiatyn Jewish cemetery is mostly overbuilt with one or more large multistory apartment buildings in a large residential complex, with only a small portion of the original site still open (currently used for car parking behind the apartment). A small portion of the site is now paved and a memorial ostensibly covering the graves of three tsadiks is marked with monuments naming them, immediately behind one of the apartment buildings. The slope behind the cemetery site is covered with thin woods, shrubs, and garbage. At the former collective farm near Chabarivka, many of the farm buildings have collapsed, leaving stacks of Jewish headstones erect in some places and fallen in others, with shrubs and trees growing through them, and garbage strewn throughout the area; there appear to be several hundred large headstone fragments at the site. 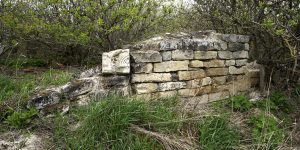 A ruined wall of Jewish headstones at the former farm site. Photo © RJH.

Details of the project: No known active project exists at the cemetery site or at the former collective farm. Local journalist Dmytro Poliukhovych publicized the displaced headstones on two Ukrainian web journals and on social media in March 2017, out of concern about discussions regarding a possible building to be erected at the farm site. Local civic and cultural authorities in Husiatyn proposed building a wall of memory to incorporate the displaced stones, and local non-profit civil society organization Blahe Dilo has expressed interest in a recovery and memorial project to coordinate with efforts to preserve the surviving historic synagogue of Husiatyn. However, no progress has been reported on any of these proposals.

Issues encountered in the project: Initial attempts to rally support for recovery and temporary storage of the displaced headstones did not raise funding or a means to route funding to local activists, NGOs, or the Husiatyn town council.

Project costs, one-time and sustaining: No project is in active planning, and no costed proposals have been published. At the time of the news reports in 2017, a figure of US$3000 was estimated as the cost of recovering the headstone fragments from the former collective farm site. No site has been identified as a temporary storage place for the stones during recovery and before their incorporation into a memorial, and no plans or cost estimates for the memorial have been assembled.

Current risks to preservation: At the time of the news reports in 2017, there was concern that plans for new construction at the former collective farm would result in mechanized leveling of the ruined farm buildings, damaging and possibly burying the displaced Jewish headstones. It is currently unknown whether any building work has actually begun at the site.

Related projects in western Ukraine: Erasure of Jewish cemeteries by removal of their headstones was very common in western Ukraine during the German occupation of WWII, including for example at the cemetery in Yezupil (Ivano-Frankivsk oblast), at Holohory (Lviv oblast), and at the old cemetery of Chortkiv, Ternopil oblast (now a wild park-like area on hospital grounds). Partial or complete overbuilding of regional Jewish cemeteries during the Soviet era was less common but still widespread, and is noted for example at the Ternopil old cemetery (now an apartment building), at Ivano-Frankove in the Lviv oblast (now private houses and gardens), at Khodoriv in the Ivano-Frankivsk oblast (now a municipal stadium), and at the oldest cemetery in Lviv (now a commercial bazaar). See also case study 19 on this website for an example with less intense damage, at Zboriv in the Ternopil oblast.

Related projects outside western Ukraine: Examples of erased and overbuilt Jewish cemeteries exist all over Europe, though fewer examples are known outside of western Ukraine. The old cemetery of Sokołów Małopolski in Poland is a notorious example, erased under German occupation and overbuilt with warehouses and a gas station during the Polish Communist period. Similarly, the old cemetery of Chișinău in Moldova was cleared and overbuilt with a municipal library and parkland. The cemetery in Novaya Mysh in Belarus is now a public park with only a single (recovered) headstone. In Ukraine but east of former Galicia, many examples of erased and overbuilt Jewish cemeteries exist, including at Dubno in Rivne oblast and Berestechko in Volyn oblast.